Your email has been sent.

In 2020 we supported a theatrical project for a group of disabled young people in collaboration with Taller de la Amistad in Nerja in which they learn skills that help them in their physical and personal development, and which gives them a lot of joy. The project consisted of classes and a performance in the Centro Cultural was planned. 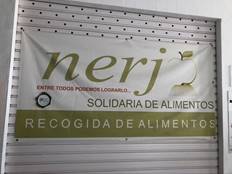 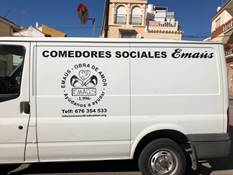 In the winter of 2020/2021, during the crisis of Covid 19, we supported the Food charities in Nerja, Solidaria Nerja and in Vélez Málaga, Emaus Obra de Amor, as in these times of crisis more essential support was needed.

The Arts Society Nerja has as one of its important aims to support Charities by collaborating in Art Projects in which Art is used as a tool to stimulate the practise and knowledge of the Arts but also to enhance personal development.

The past few years we have been actively engaged in Art projects in collaboration with secondary education in Almuñécar and Nerja.

We have however also worked with groups of vulnerable young people. We collaborated with the Museo Jorge Rando and the CEAR  (Comisión Española de Ayuda al Refugiado) in the project Un Mundo Mejor in 2018.

In 2019 we have been collaborating with The Museo Jorge Rando and the SOS Children´s Villages in El Palo. 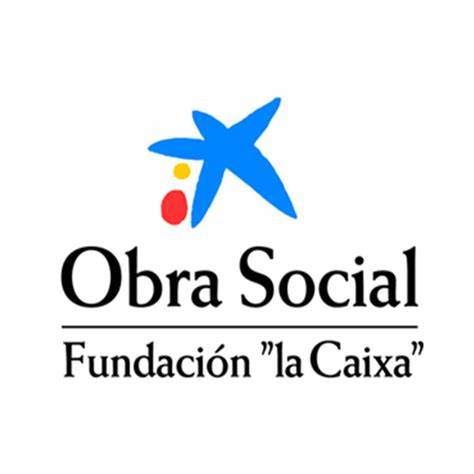 For our season 2019-2020 we are collaborating with Caixa Obras Sociales to make it possible to make as much difference as we can in children's lives.

On Monday 10 June 2019 The Exhibition of the project Forging Identity was opened at the Jorge Rando Museum in Málaga. This year our art project was in collaboration with SOS Children´s Villages in El Palo, Málaga.
There were paintings on canvas by the mothers and one father who had participated, works on paper made by the children and works on canvas made by the group of adolescents.

As well as the children, adolescents and parents, also present were the director of the Jorge Rando Museum, Vanessa Diez, who suggested this project to us, Pablo Serrato who works for the museum, who was responsible for our project, Antonio Rodriguez, the director of SOS Children´s Villages, the 3 teachers who were involved, Virginia, Geronomo and Enrique, and the 3 Arts Societies who contributed financially: The Arts Society Costa del Sol (Yvonne Sjokvist), Benhavis (Jane Norrie) and Nerja (Helen Sijsling) and many of their members.

It was obvious that the 3 teachers are the real Champions. With themes like: your place within the family and your identity, the participants all went through quite a process, a real rollercoaster, before arriving at the works that were exhibited. The teachers are really suited for this job of giving art classes to vulnerable people and wanting to take them through a process.

The parents:
6 parents were involved: 5 mothers and one father, all struggling with serious problems. Only one mother who participated was present, Pepa. She was delighted with Children´s Villages and the possibility of the parents to have their own class. She was very enthusiastic about the teacher Enrique, who was really cut out for the job. She said the art class was like a safe haven, a moment to be alone and far away from the problems at home, Pepa hugged her teacher, she was so greatful.

The paintings of the mothers were quite cheerful, some still lifes. Some of the parents had never before painted but turned out a still life like a Matisse!.

The painting of the father was very interesting: a man surrounded by his thoughts and his shadow, and in the corner people falling into the flames of hell.!!! A Dantesque scene.

The adolescents:
Their paintings on canvas give food for thought and make you stop and think. They are all so profound. Obviously the teacher has prompted them with questions, with themes like their role in the family and their identity. Some of the paintings are quite dark, a lot of black is used. I was especially struck by Inma´s paintings: a whole circle of stick like figures in red with their arms waving in the air, and one in the middle black and arms at the side. I asked if that was her and she said yes. Her mother was there too, saying she was going through a difficult period. There was another girl who had painted a nearly all grey painting called Niebla (mist). Her teacher told me that there was a whole building underneath but she painted over it and hid it in the mist.
There is painting of a girl called Judith who has painted her motto across it: Vive y deja vivir. Live and let live
Another girl gave her painting the title: Amor y odio. Love and hate.
She made a second painting which was a portrait of Frida Kahlo!
Food for thought.....She said it was wonderful how you can express your feelings in a painting.
This was not just an art class, killing time, it has caused very interesting thought processes said the teacher, found obviously some dark sides, hopefully they will eventually forge their identity.

The children:
There was a child, Camille, who had only recently joined the group.
The children had worked on paper and with plasticine and the end result was a collage of cuttings from their works, glued to a big piece of paper as a final collective work. This girl only joined the class in time to help glue the pieces of art into the whole and she was so happy and proud showing the parts she had glued on to the paper, little rosettes and hands. She was so happy to be there and would love to be part of the painting group after the summer.

After the speeches there was a performance by a young man giving a violin concert, all organised by the Jorge Rando team.

It was wonderful to see so much happiness and greatfulness together, the mothers and children, but also the director of SOS and the 3 teachers. All real champions!
It was a pleasure and honour for us to collaborate on this project. It was great to realise we were making a difference in someone´s life. I think it actually is one of our most important objectives as The Arts Society Nerja.
After the summer this project will continue and finish before Christmas.

On behalf of SOS Children´s Villages we would like to thank all our members and all our visitors for having made this project possible. The exhibition will be in the SUR in English this week, on the Canal SUR and we will be sending an article to the Review, the magazine of The Arts Society in the UK.

In May 2019 there was an article in Sur in English about the exhibition:

Building a Better World through Art 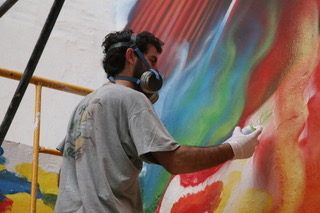 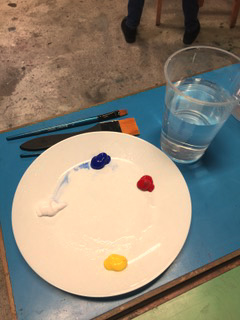 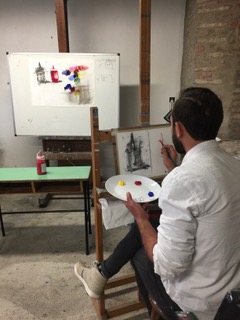 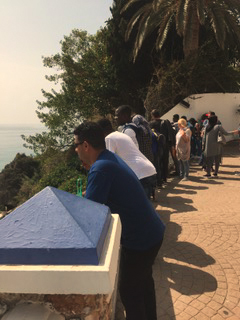 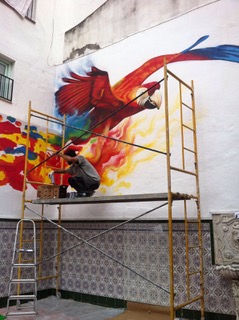 ‘A Better World’ was the title of our Young Arts Project hosted by the Jorge Rando Museum in Málaga for a group of 16 young people from the refugee centre CEAR (Spanish Commission of Assistance to Refugees).

The project included 3 months of painting workshops, a visit to the Nerja caves thanks to the collaboration of Fundación Cueva de Nerja and Viajes Verano Azul and culminated in mid May with an exhibition of the participants’ works on the theme of ‘A Better World’ in the museum and a mural painting in the courtyard of CEAR.

CEAR has been defending the right to asylum and human rights since 1979, promoting the integral development of refugees fleeing armed conflicts or violations of human rights, asylum-seekers, stateless persons and migrants in need of international protection and / or at risk of social exclusion. Today more than 51 million people have had to flee from their homes for these reasons.

The painting workshops, given by the professional artist Jerónimo López, sought to encourage team work, self-esteem, a feeling of equality, positivity and creative expression and integration through Art. The young refugees shared space with other, regular artists at the museum stimulating social interaction and cultural exchange with the aim to support a base of values and human rights critical to the integration of young people whose lives have been uprooted due to conflict, misery and violence.

The paintings express these young people's emotions and their dreams of a better, colourful and uplifting world. A beautiful mural reflecting this concept, was created by the participants and Málaga Urban artist Andrés Serna and can be seen in the courtyard of the CEAR centre.

10 paintings were selected from the impressive works to feature on greeting cards. All proceeds from the sale of the cards are for CEAR. We will sell these cards before the lecture. They make beautiful Christmas cards. Please come and see them all. 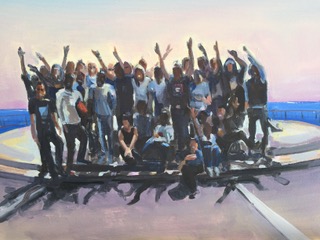 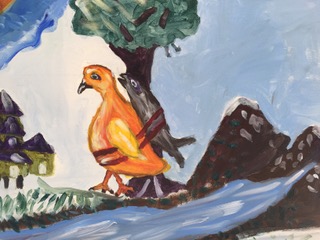 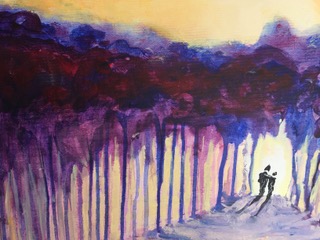 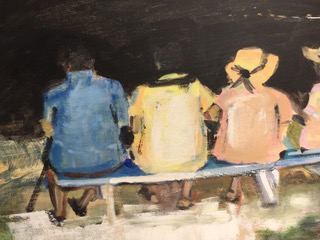 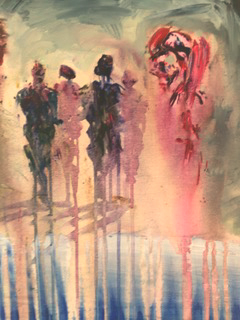 This stunning mural in the courtyard of CEAR in calle Ollerias was created by all members of the project led by the muralist Andrés Serna, whose theme alludes to the creation of a better world. 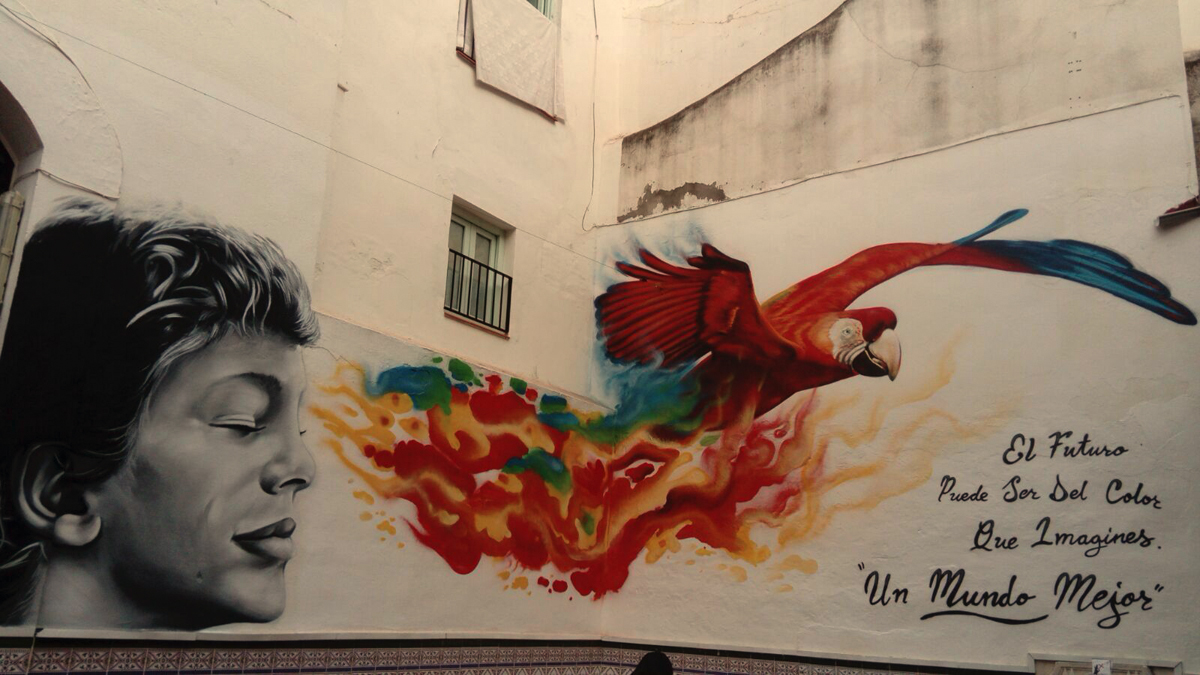 During the 2012 -13 season Nerja DFAS undertook an arts project to support a local secondary school.

After meeting the Heads of English and Art at the school and discussing their requirements, DFAS Committee agreed to assist in the following ways: 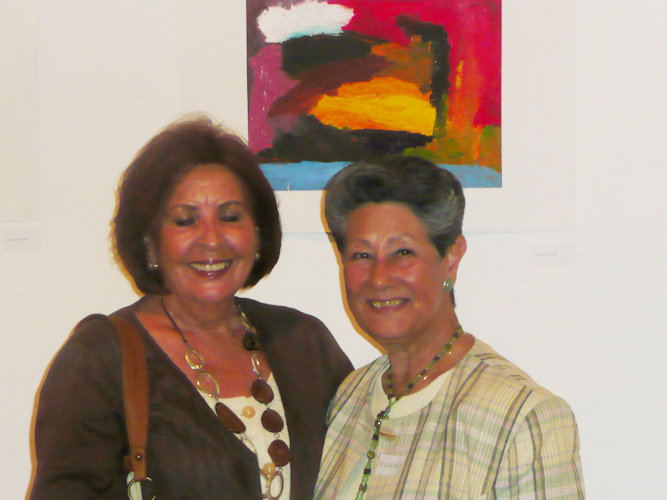 Papier maché ornaments made by pupils. 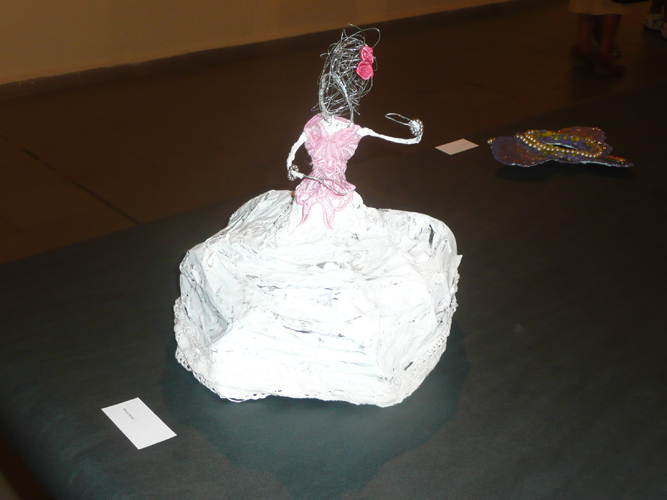 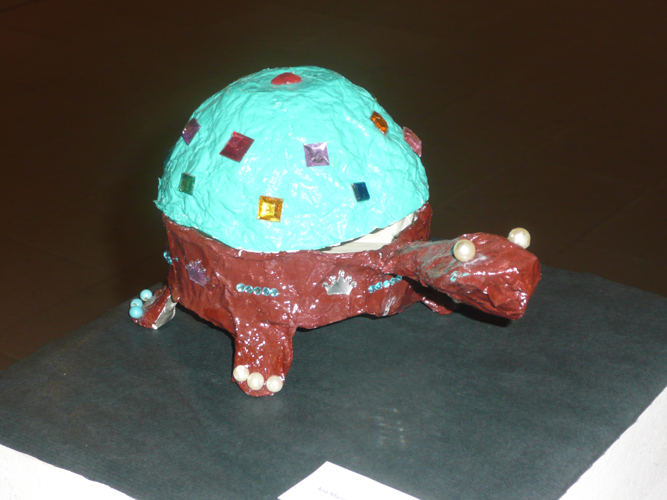 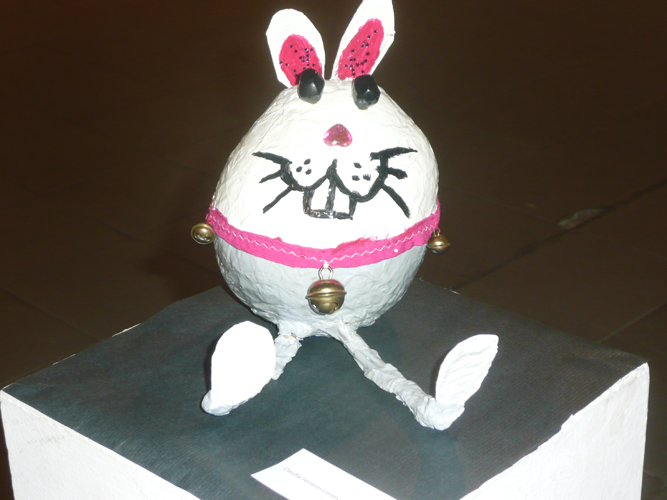 In June, an excursion for 45 pupils was arranged, to visit the Thyssen and CAC, Malaga. The exhibition was arranged in July.

A day out at the Thyssen. 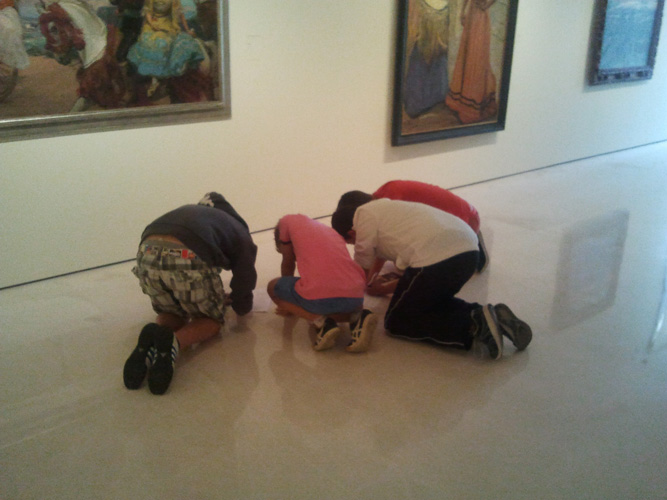 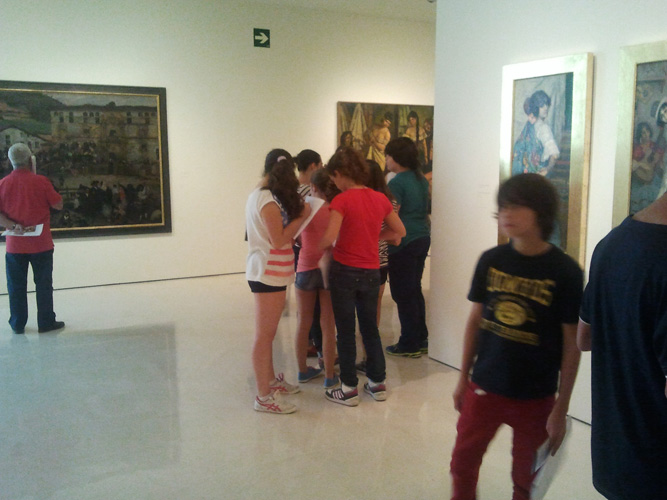 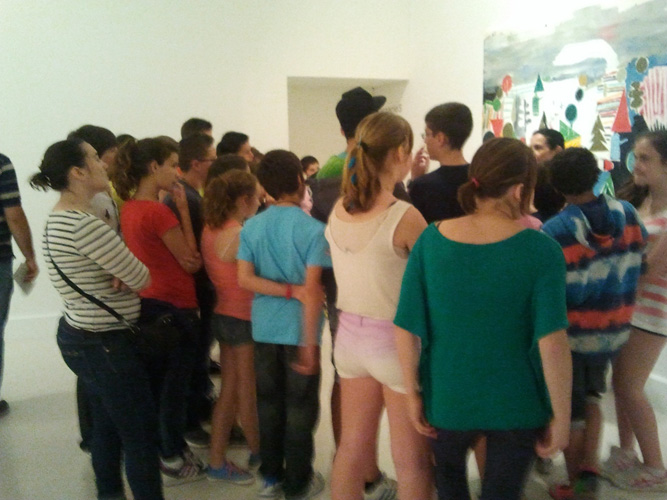 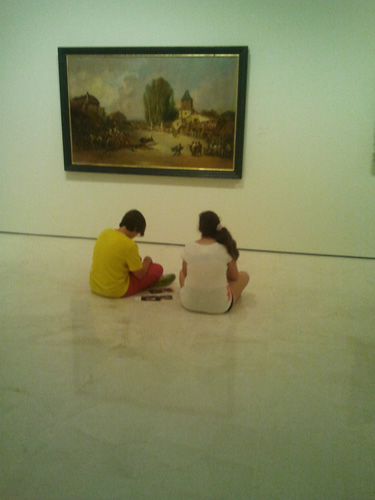 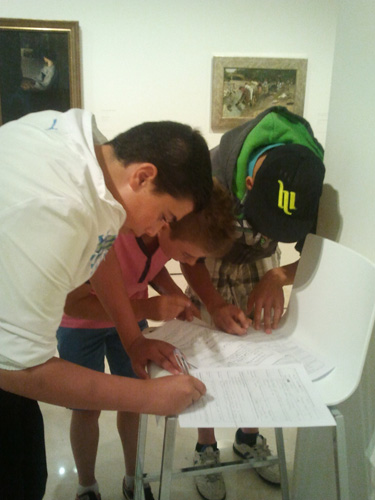 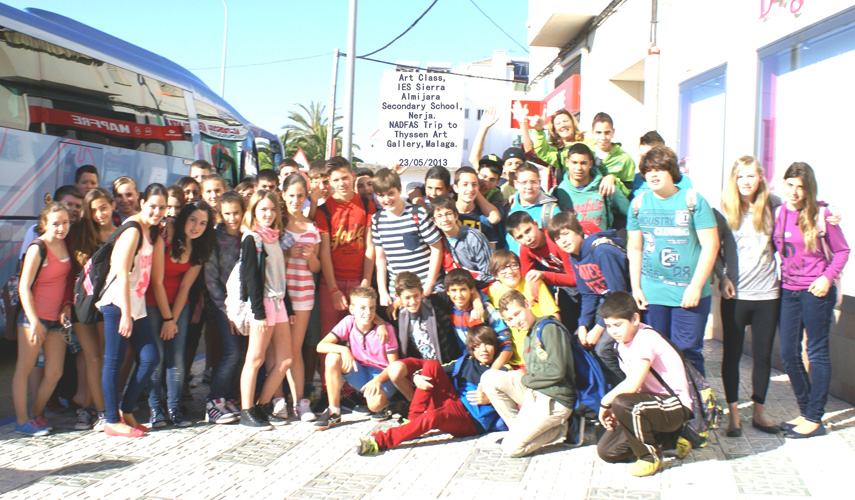 It was a most exciting and rewarding project for all concerned and Nerja DFAS would like to express its gratitude to ColArt for their donation of all the art materials used in the project and also to NADFAS House, London for their generous grant.

We had wonderful publicity by John Peatey of the Costa del Sol News. Please see the articles below.

In 2007 a donation was made to the Almuñécar International School.

The Primary Department purchased materials to decorate a large wall panel and the Chairman and committee members watched the work in progress throughout the season.

The photograph here shows the finished work mounted on a wall in the school's dining room. Also shown are Ruth Lucas, our chairman  and Ms F Jacobs, head of the Junior School, together with some of the contributing artists.